The word legend is often over used in the world of rock 'n' metal, but after reading this I think you will agree that Scott Gorham is indeed a legend, and deserves legendary status.

Born William Scott Gorham on March 17, 1951 in Glendale, California he rose to international recognition as one of the "twin lead guitarists" for the Irish rock band, Thin Lizzy. Although not a founding member of Thin Lizzy, he served a continuous membership after passing an audition in 1974, joining the band at a time when the band's future was in doubt after the departures of original guitarist Eric Bell and his brief replacement Gary Moore. Gorham remained with Thin Lizzy until the band's breakup in 1984.

He and guitarist Brian Robertson, both joined the band at the same time, marking the beginning of the band's most critically successful period and together developed Thin Lizzy's twin lead guitar style while contributing dual backing vocals. Gorham is the band member with the longest membership after founders Brian Downey (drummer) and frontman and bass guitarist, Phil Lynott. Since 1996, Gorham has continued to perform with Thin Lizzy on guitar and backing vocals, having assembled various lineups after the death of band leader Lynott in 1986. In 2012, Gorham co-founded the Thin Lizzy spin-off band, Black Star Riders, in order to showcase new material.

Scott Gorham was raised in California, and began his musical career at 13, learning to play the bass guitar, and joining several local teenage bands including The Jesters, Mudd and The Ilford Subway, the latter recording a single, "The 3rd Prophecy" in October 1967. He switched instruments when a close friend of his, a guitarist in his then-current band, 18-year-old Steve Schrage, died in a motorcycle crash in Glendale in 1968. Gorham's friend (and bandmate in a number of bands) Bob Siebenberg later recalled, "That incident devastated Scott. He decided the very day that he heard about the accident to take this kid's place, to try to get to where this kid would have eventually gotten to. Scott stunned everybody by dropping the bass, which he was very proficient at, and switching to guitar. Gorham subsequently joined Redeye in 1969 with Siebenberg, and the two joined Benbecula in 1970 before Siebenberg moved to England in 1971.

In 1973 Siebenberg, by then also Gorham's brother-in-law and drummer with Supertramp, convinced Gorham to join him in England, with hope of playing in the same outfit Gorham was unable to find work with his friend, so he started playing with a number of bands in pubs around London, before starting his own band, Fast Buck. In 1974 a musician acquaintance, Ruan O’Lochlainn, suggested he attend auditions being held by Phil Lynott, Thin Lizzy's primary songwriter, and one of the founders of the band. Thin Lizzy were at the time in a state of flux and reorganization, and while the drummer and bassist remained, two new guitarists were wanted. Brian Robertson, at age seventeen, had already been chosen before Gorham auditioned and joined. The two guitarists shared lead guitar roles, and harmonized with one another, as well as alternately playing rhythm and lead, which led to Thin Lizzy having what was considered a unique sound. 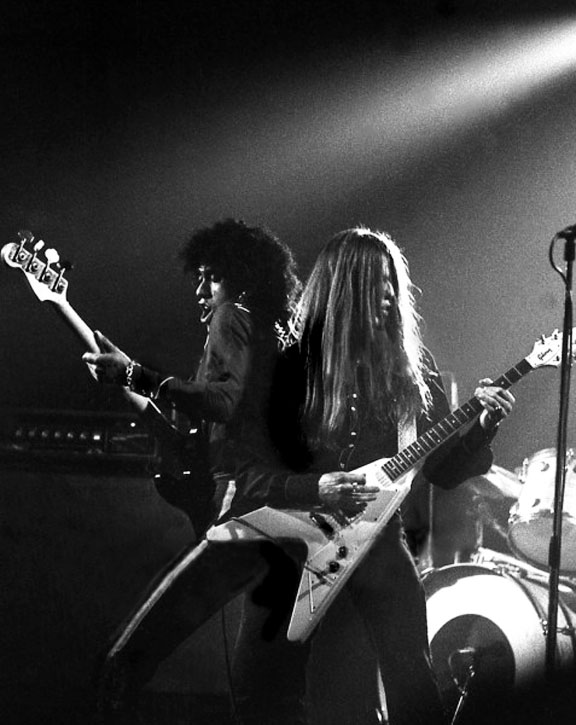 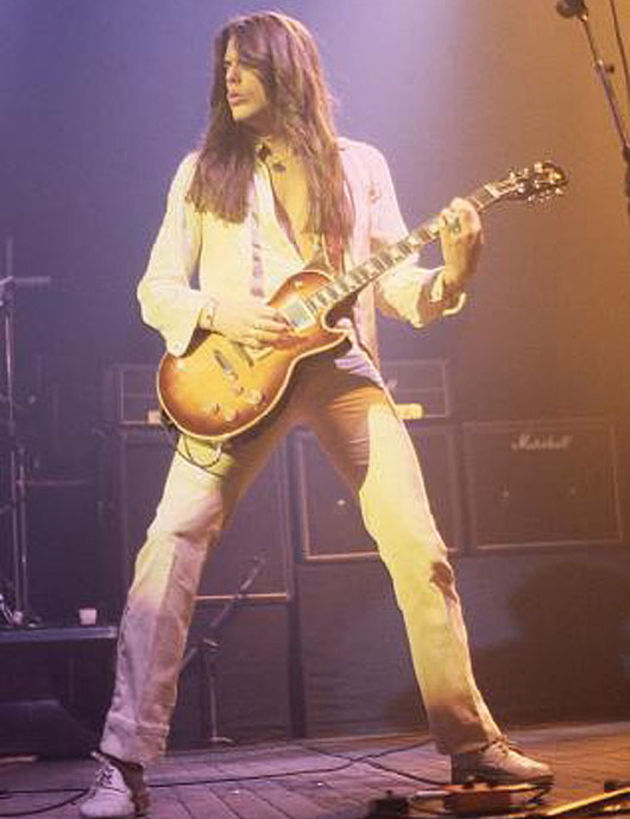 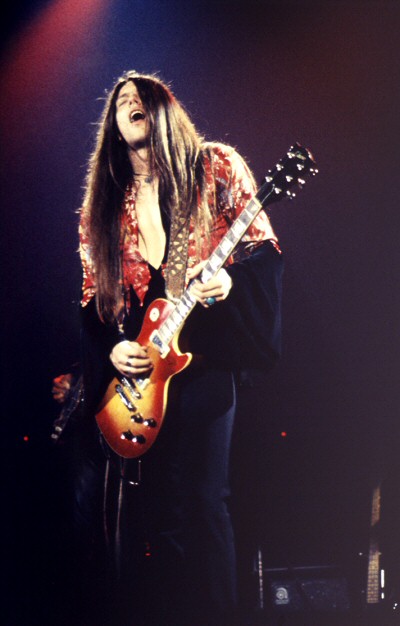 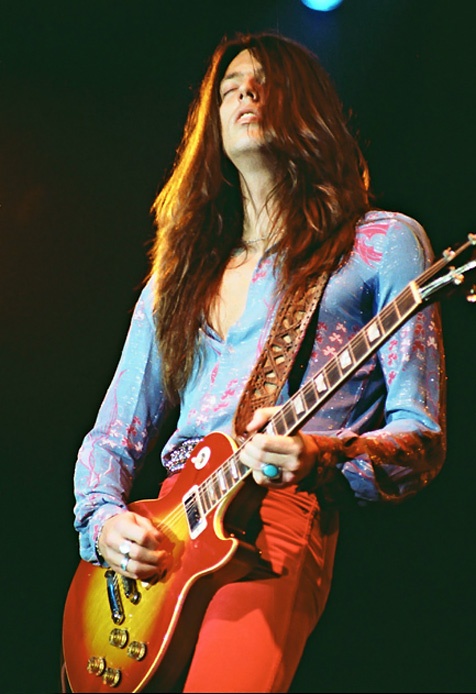 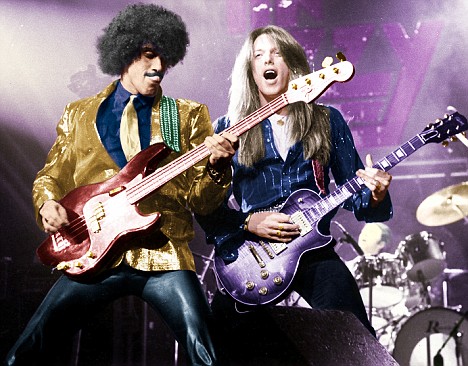 Upon joining Thin Lizzy, Gorham took on a songwriting role as well as that of a guitarist. "She Knows", the opening track of his first album with the band, Nightlife, began a long songwriting partnership with Lynott. They co-wrote two songs for Gorham's next album with the band, Fighting, and Gorham contributed one of his own, "Ballad of a Hard Man". This was to be the only Thin Lizzy song that was credited solely to Gorham. His role in the band remained consistent until the recording of 1977's Bad Reputation album, for which Brian Robertson was largely absent. Gorham played all the lead guitar parts for the majority of the songs, including the hit single "Dancing in the Moonlight (It's Caught Me in Its Spotlight)", though he convinced Lynott to bring back Robertson and have him record the solos for the songs "Killer Without a Cause" and "Opium Trail".

When Gary Moore returned to the band, replacing Robertson in 1979 for the album Black Rose: A Rock Legend, Gorham took the new arrival as an impetus to improve his own playing, as he did with all his subsequent guitar partners in the band. At the same time however, drug use became more prevalent within the band, and Gorham and Lynott both became addicted to heroin, with a negative impact on the creativity and musicianship in the band Gorham was unable to rid himself of the habit until 1985, after the band had split up. 1980 introduced another co-lead guitarist in Snowy White, culminating in the album Chinatown for which Gorham co-wrote two songs. His songwriting contributions increased on the band's next effort, as he was credited with co-writing almost half the songs on the 1981 album Renegade Thin Lizzy split up in 1983.

After Thin Lizzy broke up, Gorham joined Phenomena II, where he met Leif Johansen (ex-A-ha and Far Corporation) with whom he formed 21 Guns, releasing three albums. He has also played with Asia, the Rollins Band, and Supertramp. Gorham's sister Vicki married Supertramp's drummer Bob Siebenberg. In 1997, he played guest guitars on the track "I'm Alive" from Psycho Motel's album, Welcome to the World.

Gorham reformed Thin Lizzy in 1996 with former band members, playing various tours in tribute to founding singer, songwriter, and bassist Phil Lynott, who died in 1986. The tour was named the 20/20 tour – 20 dates for 20 years. After John Sykes' departure in 2009, Brian Downey, Darren Wharton, and Marco Mendoza rejoined the band. New to the lineup were Def Leppard guitarist Vivian Campbell and former The Almighty vocalist Ricky Warwick. After months of pre-production and two weeks of rehearsals in Los Angeles in November 2010, this version of Thin Lizzy started a world tour in January 2011. Touring continued throughout the year and into 2012, with Campbell eventually being replaced permanently by Damon Johnson.

To coincide with the fortieth anniversary of the release of the Thin Lizzy album Jailbreak, there was a selection of special Thin Lizzy shows in 2016–17. The band consisted of Gorham, Ricky Warwick, Damon Johnson, Darren Wharton, Scott Travis and Tom Hamilton.

After Johnson joined the band, Gorham stated that the band members were considering recording new material, which would be the first new Thin Lizzy studio recordings since 1983. In December 2012, he co-founded the Thin Lizzy spin-off band Black Star Riders as a vehicle for the new material, rather than release it under the Thin Lizzy name.

Black Star Riders' first album All Hell Breaks Loose was released in May 2013. In June 2013, he won the "Riff Lord Award" at the Metal Hammer Golden Gods Awards for his work on the album.

A second Black Star Riders album, The Killer Instinct, was released in 2015, followed by touring throughout the UK and Europe during the remainder of the year. Gorham concentrated on a small number of Thin Lizzy festival appearances during 2016, and also began work on the third Black Star Riders album Heavy Fire. Heavy Fire was released in February 2017, and Gorham confirmed his desire to create new music rather than simply continue to play material from his past, stating, "I think it's important if you are a musician, or at least a serious one, that you want to start breaking new ground and not doing the same thing over and over. It's important to keep dipping into that song writing well.

So with this in mind and that Scott Gorham celebrates his 66th birthday on Friday 17th March (St Patricks day) we dedicate our poll to who I believe is a true legend.

Simply vote for your favourite song, or post your own (please only post songs Scott has played on) and we will play the song with the most votes at the end of the show.